With success come attention, fame, visibility, and other expressions of power such as fortune. Individuals earn that success through external means as well as through other people. Over the last 20 years, the world has witnessed the very public implosions of several "supernovas," prominent people in the business, sports, political, and entertainment arenas. Such disintegrations have taken a variety of forms, including substance abuse, major health crises, unethical and/or unlawful behaviors, and suicide.

What is the difference between superstars who become supernovas by imploding and those whose fame has not resulted in such meltdowns and are able to sustain their success?

The Spectacular Implosion of Supernovas 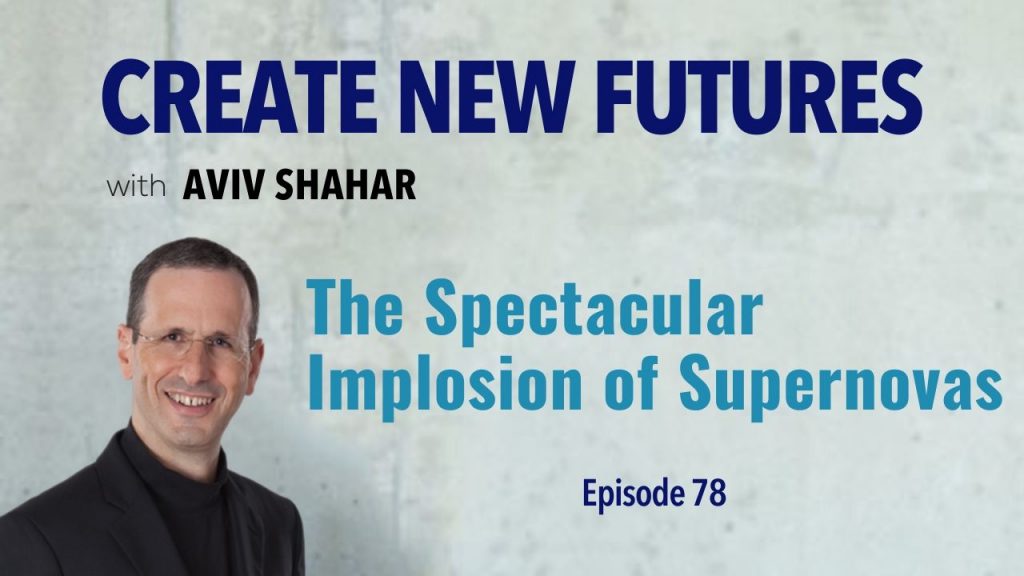 The answer lies in what they choose to do with the power their success engenders. Some have developed the capacity to manage their prominence safely, being a good steward of their power by using it responsibly and being accountable for its applications. Others have squandered it by abusing their influence and fame. Let's explore these different choices and see what lessons we may learn.

If your internal power, which we call character, does not match the external power of the fame you have accumulated, you are in danger of imploding. Such an imbalance may manifest itself in variety of forms, including sabotaging your health, engaging in unethical or illegal behavior, or abusing yourself and/or others.

Picture yourself standing in the middle of a circle of power. The strength of this interior power circle is a function of your character: your values, principles, beliefs, ethics, self-knowledge, clarity, discipline, grit, and integrity.

Imagine also that everything outside of the circle - the external power that draws its strength from your opportunities, success, luck, and the attention and focus of the people around you - is exerting an opposing pressure. The danger of implosion arises when the power of the external pressure of fame becomes greater than the internal capacity of your character to contain and channel it responsibly.

The anatomy of this syndrome can be visualized as follows. Imagine you have acquired fame, influence, financial power or artistic, athletic or leadership success that metaphorically equals the power of 150 volts. This metaphoric number represents the external pressure generated by the intensity and power from your environment. Such external pressure may arise from your achievements, from others' "discovery" of your talent, from an unexpected increase in your responsibilities, from an inheritance, or from anything else that thrusts you into the limelight of influence and fame. As seen in the visual below, each of those external vectors of influence alone can contain the power of 150 volts; combined, they become much more powerful and require greater internal power inside the circle to counteract their collective effects. 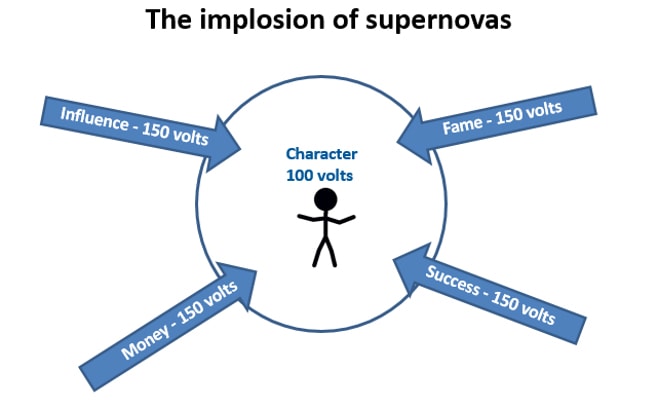 At the same time, suppose that because of your accelerated growth of fame and influence you have not made your interior development a high priority. As a result, you experience a gap between the competing power differentials. In terms of our numerical example, the strength of your character - your self-knowledge, clarity of personal values, beliefs, and principles, and the discipline of what you will and won't do - only equal 100 units of power (volts).

In this scenario the external pressure is much greater than the interior capacity to withstand it. This unsustainable imbalance leads to one of two outcomes.

The first outcome of an unsustainable imbalance is that the external pressure penetrates your internal circle, causing an implosion or a series of implosions that harm you and/or the people around you. This is the supernova phenomenon of famous people who experience spectacular and often public breakdowns of their fame and influence through some form of abuse (substance, power or money), or collapse (relational, marital, or health), or even suicide.

The implosion typically occurs at your weakest link, the point at which the buildup of external pressure finds the crack in the inner circle of your character. Classical supernova breakdowns initially fall into two broad categories: those that harm others and those that harm themselves. In most cases the initial damage is not contained; eventually you harm yourself as well as those around you.

Many of these very public supernovas include catastrophic collateral damage: lives are changed irrevocably, jobs are lost, credibility is destroyed, financial safety vanishes, precious relationships are ruined, and in some cases, there are devastating health consequences and/or suicide.

There is one more critical awareness to consider in the supernova scenario. That is, implosions typically don't happen all at once. When carefully traced, the first cracks often appeared long before the spectacular public humiliation incident(s). The early cracks are small and if caught and addressed, they easily are recoverable. In most situations red lights flash on your dashboard and/or on the dashboards of the people around you. At these points there are many opportunities to intervene, change course and avert a cataclysmic outcome.

Why do people follow the lethal death spiral by refusing to avert a catastrophic conclusion? When you stand in the light, you cast a shadow. Left unexamined, that shadow may develop into a lethal combination of hubris, vanity, blindness, extreme imbalance and/or a pain-induced numbness. To avoid the inevitable supernova implosion syndrome, you must choose an offramp alternative that facilitates option B.

Option B
The second possible outcome of an unsustainable imbalance between the power of external fame and that of internal character is that the voltage differentials catalyze an accelerated development on the inside. This scenario can involve self-discovery of new insights, recalibration that leads to an emergent clarity of purpose and the crystallization of values, or the formation of various support systems such as a coach, a therapist, and/or caring and honest truth-tellers.

This option implies that you are willing and able to engage in the inner work of growth and are working quickly and diligently to build the interior power to match the 600 or more volts of external pressure. Converting the imbalance into a sustainable equilibrium is illustrated in the visual below. 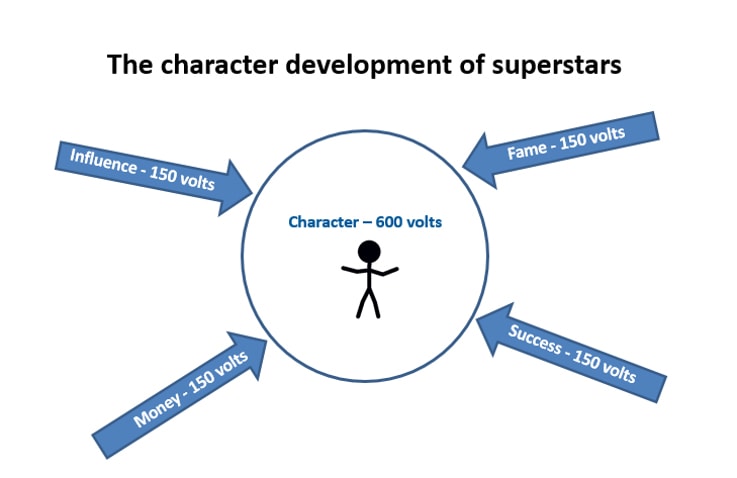 Now it's your turn. Turn the key. What service, development and spiritual work must you do to build your character and readiness to embrace greater power and visibility so you can avoid the pain and public humiliation of the supernova syndrome?

Identify concrete steps you will take. If necessary, engage the help of experts and the guidance of those who love you and care for your growth to find your next steps. By building your capacity to manage power safely and with integrity, you help others do the same, thereby serving your own purpose as well as theirs.