Consider three "edge of the envelope" scenarios: a black swan; a perfect storm, and a lethal jackpot.

A black swan is an unpredictable event that unleashes severe consequences.

A perfect storm occurs when a rare combination of circumstances drastically and negatively aggravates an event.

What is a lethal jackpot?

While assisting my clients' leadership teams throughout 2020 as they grappled with the challenges of the pandemic and the need to pivot from crisis management to managing the crisis, and then to evolving the future of their organizations, I realized the extent to which the lethal jackpot insight could enhance their efforts. Here is the updated description of the insight and its application to your life. 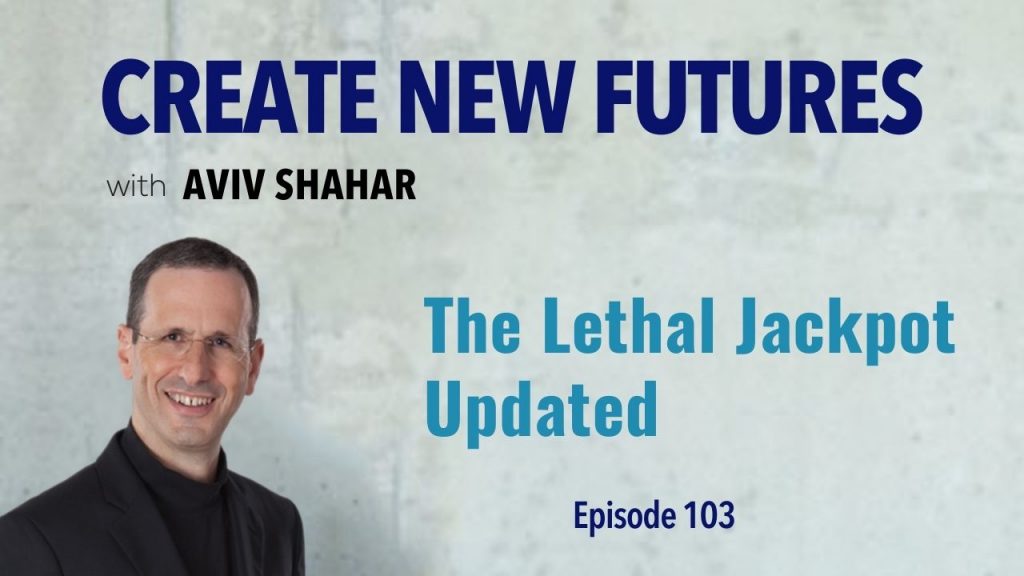 How I discovered the lethal jackpot

A few months after I was assigned to my Israeli Air Force squadron, my Operational Training chief instructor fatally crashed his plane during a war games practice. The Operational Training phase of my Air Force experience was an exhilarating time for me. Having just completed the fighter pilot course, my fellow graduates and I moved on to learning and practicing what we needed to know and do to become operational pilots. I admired my chief instructor. He was a witty guy with a great sense of humor who knew how to get us to focus on what matters. An insistent message he drilled into us was do not take risks you don't have to take. Stay within the practice envelope.

On that memorable morning, as an incredibly young pilot in my squadron unit, I was surprised and excited to discover my name on the board assigned to the formation participating in the Air Force-wide war games. We had completed the morning briefing and were preparing for our flight when the message came through that there had been a fatal accident. We soon learned the pilot was the formation lead - and my chief instructor. I was shocked and physically shaken. To hide my reaction, I found a corner where no one would see me as I threw up. The Air Force culture was one of tough bravado that required us to maintain our surface show of confidence. Naturally, I concealed how shaken I felt and joined my colleagues in putting on the requisite show. You did not remove yourself from a formation you were assigned to, especially not on a war games practice day.

Several months later, one of the best pilots in the most advanced F15 squadron crashed during a flight on a clear evening. Shaken for the second time, I also was scared. In just a few months, two highly proficient pilots among the Air Force's best of the best had died when their planes crashed. Two talented young men, with hopes and loves and dreams for the future, ended up in the ground. I was petrified. What was to prevent me from following in their footsteps?

Now that it was apparent to me that being a highly trained and gifted pilot was insufficient to avert a devastating disaster, I became obsessed with finding a way to avoid such a catastrophe. Convinced that the key to staying alive was preventive, I set out to search for a traceable recurring cause that shapes the anatomy of accidents.

To pursue this urgent inquiry, I accessed the investigative reports from 20 years of Air Force accidents. The more I read, the more disturbed I became. I was unable to find any unifying theme. Instead, each accident had its own story. Some involved mechanical failures, while others resulted from unique weather conditions. Many causes were traced to pilot error, such as experiencing vertigo or flying too low. Because these accidents had occurred with experienced pilots, my rational conclusion was that one easily could happen to me.

In frustration and disgust I read the reports one more time, frantically seeking an organizing principle, a universal element that could warn me of impending danger. This time, the clue that had eluded me previously emerged from the details of the reports. I realized that although each fatal event was unique, they all contained a meta-pattern.

The rule I discovered is that most of the fatal accidents occurred not just when one or two things went wrong; rather, they typically involved a rare confluence of three, four, five, or even seven things that went wrong. For example, a crash might result from the convergence of a mechanical issue, foggy conditions with limited visibility, a last-minute change of plans, someone's being in a rush, an unrelated stressful home situation, a bad night's sleep, and another unexpected minor incident that together morph into a seemingly unavoidable and fatal chain of events. This "rule" is the lethal jackpot: a convergence pattern of several edge of the envelope conditions and irregularities that together develop into an inescapable, devastating crash.

By examining the nature of this deadly pattern, I found the practical insight I was seeking. This surprising discovery and its actionable brief became a game changer that saved my life on several occasions.

Instead of merely trying to avoid accidents, I realized I must intercept and stop patterns of convergent irregularities and risk. My reverse engineering of the Air Force crashes suggested that removing any one factor from the equation had the potential to stop the entire chain of events that had led to the crash. If just one of a series of irregular factors could be intercepted at the right time, the lethal jackpot would be averted and the accident prevented.

The lethal jackpot insight catalyzed what has become a daily practice for me in all aspects of my life: watching for the pattern. That is, when something goes wrong, I become alert. When a second surprising, irregular, or risk factor enters the equation, I shift into a super-alert mode, searching for a possible third factor like a hawk hunting for prey. If it shows up, I abort the pattern as soon as I can.

Here's a hypothetical, somewhat common non-work example. While I'm driving cross country with my family, a large semitrailer suddenly and unexpectedly shifts into my lane, forcing me abruptly to touch the brakes and maneuver to avoid a collision. As is my practice in this type of situation, I say out loud, "That's a number 1," which is my self-instruction to be on alert. As we drive further down the road and experience a heavy rainfall, another driver cuts into my lane. I simply say, "That's numbers 2 and 3." To abort the pattern before it develops, I get off at the next exit and we stop for a lunch break.

Let me be clear: I am not suggesting shying away from challenges. I do not drive into twisters and I am not in the business of playing a Russian roulette with my life. In the last several years as a solo consultant, I have engaged concurrently in five to seven complex consulting projects with a variety of Fortune 500 companies while simultaneously participating actively in multiple nonprofit endeavors. Given that my consulting work always is highly customized, I have decades of experience in operating on the edge of the envelope.  The point is this: when you operate on the edge of the envelope you must be vigilant about identifying and interrupting risk converging patterns.

Applying the lethal jackpot insight in life and in business

In recent decades, many companies have aspired to achieve the highest levels of efficiency. In attempting to deliver more value for their shareholders, they developed lean operations, just-in-time supply chains, eliminated all redundancies, outsourced, and offshored whatever they could. In certain situations, this sometime myopic focus on the short-term resulted in less resilient organizations and more fragile systems. In addition, it created conditions that make organizations and systems more prone to experiencing the lethal jackpot.

Resiliency and efficiency can produce conflicting imperatives and tough tradeoffs, which is why context matters. For example, because of the catastrophic implications of plane crashes, multiple redundancies are designed into all aspects of avionic systems. Landing gear, fuel tanks, electronics, and radios all have built-in redundancies designed to be activated when a major system fails.

In other industries, recent decades have seen the pendulum swing all the way to the extreme efficiency end of the resilience - efficiency continuum. For example, many companies choose to operate with a single point of failure, such as having only one supplier of mission-critical components of their core business. Why? Because it is efficient to do so.

The extreme focus on efficiency is a systemic problem; there is no one person to blame. Setting a goal of achieving the ultimate efficiency is in part a defensive strategy to placate belligerent activist investors who otherwise might try to re-order company leaders' priorities.

One obvious point Covid19 brought home for senior leaders is that they must reexamine their strategic and operational assumptions. I anticipate companies will re-think their priorities to strike a sustainable balance between resilience and efficiency. I encourage leaders to inquire about converging risk scenarios and to develop antifragile systems and businesses.

Upon reflection, several executives shared with me that a postmortem of their own companies' critical incidents, including major recalls, indeed suggested the existence of a lethal jackpot pattern. For example, a new production line that involved a first-time outsourced partner converged with intensified market demand and a leadership change. Those factors, in tandem with additional local irregularities, formed a classic lethal jackpot that resulted in a catastrophic incident for the company.

Intercepting a lethal jackpot is not easy, especially in large global enterprises. In those and other types of organizations, several surprising irregularities may occur daily. How do you separate the signals from the noise? The true answer is you often can't differentiate between them. In fact, today's noise may be tomorrow's signal.

Additionally, leaders must build anti-fragile systems that are capable of identifying lethal jackpot patterns and are equipped to counteract or mitigate unwanted risks with agility and resilience.

Now it's your turn. Turn the Key. Where is a lethal jackpot emerging in your life? Recognizing irregular signs in your ecosystem, in matters of health, in relationships, at work and with your teams is essential. Averting a vicious spiral descent in those critical aspects of your life is a part of conscious leadership. Remember, in most situations you have the power and the responsibility to interrupt and stop a deadly spiral into a lethal jackpot pattern before the crash. Your first responsibility as a leader creating a new future for yourself and your organization is to be on alert so you can intercept and avoid irrecoverable disasters. You can inspire people to achieve their visions only when you are alive.