This Key unlocks a critical insight that will help you define the focus of your development and growth efforts. You will discover the risks of a displaced self-definition and learn about four laws that govern and impact your results.

Leadership and The Law of Becoming

It is easy to be against other people's beliefs, values, ideas, and expressions. Many people would agree there is much that is "not right" in this world, in society and in organizations. Yet those who find reasons to be upset, angry or against others are taking the easy road; it's much more difficult to stand for ideas, values and beliefs. 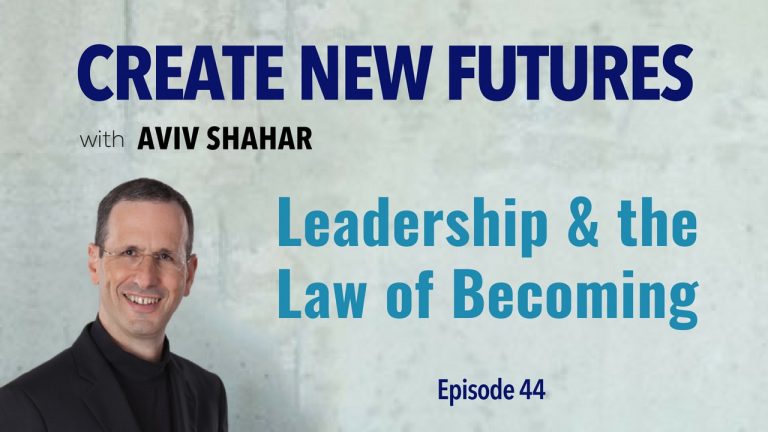 We are in a political and cultural season in which an increasing number of people describe themselves as being against the other side and/or against a future they do not believe in, rather than one they do. The polarizing energy of "Let's destroy the opposite side" engages the reptilian brain and is more viral than the energy of "Let's build a new future." The question we each must reflect on is this: "Where do I choose to invest my energy?"

History is shaped by courageous people who rise up against oppression. They have taught us that fighting for something-a cause, a belief, a vision-shapes the outcomes and legacies of their endeavors. Mahatma Gandhi, Rosa Parks, Eleanor Roosevelt, Nelson Mandela and Martin Luther King -- all were compelled by a vision of a different future. The futures to which they aspired fueled their spirits and their actions and struggles.

For example, Mandela was transformed by the focus on his vision of a free and democratic South Africa, where each person had a vote. The compelling power of the vision overcame his resentment and hatred of the Apartheid government. Mandela recognized the ultimate futility and emptiness of hate, and the power and energy of vision.

There is real danger in defining yourself by what you stand against. Centering your energy on what you hate or what makes you angry is risky, as illustrated by the following laws:

2. The Law of Ineffectual Displacement
The second risk of fighting against a source of upset and resentment is being ineffective. The three displacement vectors are:

Since distraction is the business model and preoccupation of most of today's media, we see these three vectors on display 24/7. TV and social media continually sensationalize trivial happenings, events, actions, behaviors and perceptions that are irrelevant to you. They polarize, look backward, and obsess on fueling conflict. Blaming will get higher ratings than taking responsibility, and resentment and hate are more viral than a simple and grateful appreciation.

Consider what matters for you. It is much better to focus on desired outcomes, preferred solutions, formative growth and positive development. You then can move toward the point of efficacy with a growing return on investment, instead of diluting what you can do and who you are capable of becoming.

3. The Law of Hollow Victory
The third risk of centering your energy on fighting an enemy is that you accomplish your goal. When your sole purpose is the removal of that which you resent, your success in destroying it leaves you empty. Victory is hollow when it brings death, and with it the death of purpose.

If the focus of an organization or a nation is to destroy an enemy, what will people do after they declare victory? The risk is being left purposeless and empty-handed. Campaigns that focus on what they stand against without also articulating an alternative vision of what they are for may be effective in the short term. But they cannot connect with the zeitgeist of a better tomorrow. The glory of anger is not sustainable; it only begets death and a hollow victory.

Your habits are perpetuated because the "muscle memory" and behavioral patterns tend to repeat themselves, whether they're a fascination with sports, the stock market, gardening, gambling, violence or a life of service. You can choose to deride and make others feel small, or encourage and help them achieve their heart-felt desires. The propensities you express and the actions you repeat build and perpetuate morphologically as the patterns recreate themselves.

Surely you know people who like to complain. As soon as they resolve one complaint, they quickly find a new one. The Law of Perpetuity says a professional complainer will always find something to complain about. "Karma" is something you fall in love with and won't stop doing, be it "good" or "bad."

Be Clear and Lead
You must be very clear about what you are not prepared to support, what you will not lend your energy and presence to, and what you will not allow or have in your sphere of influence. This is your birthright and the mandate each of us is given. We are endowed with the power to choose between taking a stand for or against people, ideas, beliefs and values. Investing your life force in fighting against is simply not as effective as investing in fighting for an alternative. People, organizations and nations don't change by focusing on what is wrong; they transform by focusing on what works, and doing what's right. People who stand for ideas continue to evolve; they don't get stuck in an outdated fight whose outcome cannot change. Instead, they create new possibilities, fashion ingenious solutions and enable innovative opportunities and futures.

Next time someone comes to you with a complaint, try this: "Please tell me what you are for, not what you are against. Tell me about your alternative ideas. Tell me about your creative solutions." This request will help the people around you examine their responses in a different way. You lead by helping others put the Law of Becoming to work for a promising future. The Law of Perpetuity will follow with great dividends as you help them disarm the Law of Ineffectual Displacement and Hollow Victory.

Now it's your turn. Turn the key. Focus on what you are for, on the positive future you are creating. Be your own leader.