What are the insights that propel the Create New Futures methodology?

This was the framing question I asked the leadership team as we started our meeting.

Before sharing how the team arrived at the answer, let me describe the situation.

Energized by a vision of renewal and determined to catalyze new organizational and business outcomes, the VP of a Silicon Valley corporation asked me to design and lead a global virtual summit with her extended leadership team.

Six weeks earlier we had conducted a three-day Create the Future virtual strategy event with her senior staff, a core team of 14 directors. During this event, the team imagined a transformative future for the organization and developed its Horizon 3 vision, mission, and strategy framework.

The Physics of Creating a New Organizational Future 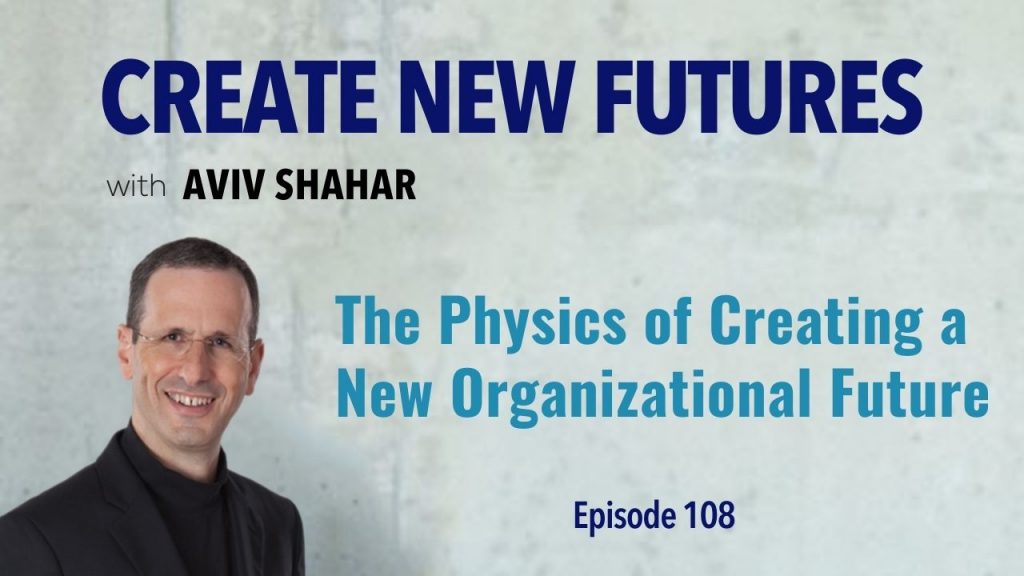 Upon my recommendation, the VP decided to engage in step two of the development process, a virtual workshop in which her 80 managers joined her and the 14 directors.

In a traditional approach, a senior team would make the decisions, crystalize the approach, and communicate the resulting strategy to the rest of the organization with instructions to operationalize it. This traditional top down, command and control approach is anchored in two premises:

The approach we developed with the VP diverged from those premises. She elected to engage her extended team earlier when the strategy was only 65% developed and had room for further divergent and convergent discovery and development cycles.

To bring her senior staff inside the logic of this approach, I asked my framing question: “What are the two big insights that propel the Create New Futures methodology?”

The same principle applies when you lift an object. The act of lifting generates gravitational potential energy.

What, then, is organizational potential energy?

In the corporate context such as the one described here, we draw the metaphorical string back and bend our bow to generate organizational potential energy by inquiring about the future.

This first big insight that guides our approach to creating new organizational and business futures was initiated by a discovery I made 45 years ago. While this is prevalent intuitive knowledge, the striking realization hit me as I observed what conversations animated people with the greatest care and energy.

The insight revealed that there is nothing as inspiring and liberating as inviting people to create their own futures. Enabling them to do so unlocks inexhaustible sources of energy, creativity, and ingenuity.

There is something deeply human about the aspiration to shape and create a more desirable future. Developing and activating a shared vision unleashes hope, novelty, and collaborative human imagination and unlocks organizational potential energy.

This game-changing insight shaped my approach to facilitating organizational change. However, it took me many more years to convert the energy potential of this discovery into the Create New Futures methodology.

The second big insight that shaped my approach to creating new futures centered on the currency of leadership. The framing inquiry that unlocked this insight was the following question: “What is the greatest leverage for a leader?”

As I described in Create New Futures, executives often answer that the leader develops her leverage by operationalizing her priorities through her resource allocation choices. My reply to this response is that although this is an excellent answer, I am seeking a higher leverage point.

The next response often is that the leader sets the vision and the mission of the organization. My standard reply is, “How do we use the vision and mission?”

Some of the most spectacular leadership failures in the last 60 years occurred because executives applied the “three Ps” rule to their organizations’ vision and mission. They printed the vision, posted it on the corporate wall, and prayed that it would make a difference.

So I ask: if we choose to do more than print and post the vision and mission, and pray that it will lead to the desired results, what actions will we take?

Given this framing, someone always get to the answer: we use our vision and mission in our daily conversations as we evaluate options and make strategic and operational decisions. Bingo!

The highest point of leverage for a leader is to shape the conversation by asking:

With this insight in mind, I assert three game-changing points:

If all we do is stay in the same conversation we were in last year, we will remain in the same place. This is not an effective way to lead.

You lead by creating conversations that mobilize actions that produce results. That’s the physics of creating a new organizational future.

We create a series of inquiry-based conversations about the future. By engaging people in these conversations, we unleash the greatest potential energy that, when converted into meaningful actions, produces novel results.

Here is the kicker: in the organizational context, rather than exhausting the potential energy, the kinetic energy amplifies it. That is, the new results create new conversations that enable the cycle of inspiration and regeneration to repeat itself. It becomes an iterative process.

Now back to the VP and her staff. I described the physics of organizational change by offering these two insights:

To the VP’s team of engineers, the logic was sound. Everyone supported the decision to engage the extended leadership team in co-creating the future of the organization by collectively identifying the Horizon 2 opportunities needed to bring the strategy to life.

This approach initially appears to slow down the development process and create what may seem to be unnecessary complexity, and even chaos. In actuality, it generates an immense potential and then actual kinetic organizational energy that ultimately dramatically accelerates the desired results.

Now it’s your turn. Use this Key’s insights to build the potential and kinetic energy of your team and create a new organizational future.